In the mood for a good mystery and longing for travel right now? I’ve got some mysteries on trains for you this week. Of course, when I say train and mystery in the same sentence, you probably think of Agatha Christie’s Mystery on the Orient Express. But that is by no means the only mystery on a train that even Agatha Christie wrote. So we’re going on beyond the Orient Express to some of the perhaps lesser known mysteries on the tracks. Click on the title to see my full review of each book and any content notes. 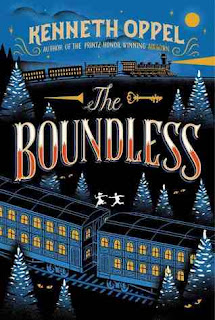 The Boundless by Kenneth Oppel

Across the great Dominion of Canada, a railway like no other has been built. It goes from one ocean to the other, and it is built to transport the largest train in the world. The Boundless is a train 7 miles long, with cars up to 3 stories high, and Will Everett's father is driving it. Will was supposed to spend the journey West in the comfort of his first class suite, but at the first stop he witnesses the murder of the guard for Mr. VanHorne's funeral car and the murderer is someone Will recognizes. Will is certain Brogan is here to rob VanHorne's funeral car of it's treasures, but in order to do so Brogan will need a key. A key Will picked up in the forest that had fallen from the dead guard's grasp. Now he's trying to avoid Brogan's murderous clutches. It should be a simple matter of sending a message up to his father in the engine, except Brogan has recruited several others working on the train and Will doesn't know who he can trust. He's about to despair, when Mr Dorian, the master of the circus on board the train, takes him in. Will met Mr Dorian and Maren, the tightrope walker, a few years before this journey. Now they are his only hope to get back up the 7 miles of train cars to warn his father about the murderous men on board. And as if vile, greedy men on the train aren't enough, Mr Dorian has some secrets he's keeping from Will, and the wilds of Canada abound with all sorts of other dangers from the Muskeg to the Sasquatch to avalanches.

The Boundless has a tall-tale, re-imagined history with a touch of fantasy feel that is actually rather reminiscent of Jules Vernes' adventure stories, if Verne had thought of having a super big train travel across the wilds of 19th century Canada. 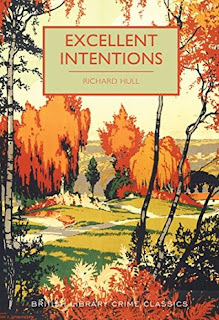 Enter the courtroom for the trial of the murder of the odious Mr. Carthgate. The man who keeled over in the train made enemies practically wherever he went and therefore the potential list of murderers is at first daunting. As the case is laid out by the prosecution and defense, readers are occasionally taken back to the scene of the crime, a train station, and the victim’s house the day before as witnesses share their memories. But it is not until the very end of the book that readers get to find out who exactly is on trial for the crime.

This was one of the very first mystery stories to be told through the setting of a courtroom, and it is cleverly written so you are kept guessing about who is on trial for the crime. 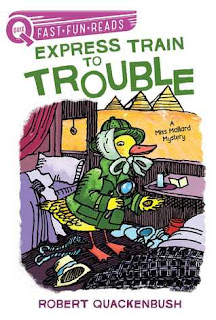 Miss Mallard is on the Nile Express train for a tour of the Valley of the Kings in Egypt. The tour is not as pleasant as many had hoped thanks to the annoying pranks one member keeps pulling. When he disappears, it is up to Miss Mallard to find the missing prankster and who absconded with him.

The story has elements that definitely give nods to some of Agatha Christie's most famous mysteries, and is a great mystery for young sleuths just getting the hang of using their magnifying glasses and little grey cells. 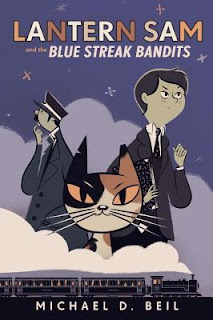 Lantern Sam is a rather unique feline. Not only is he a very rare male calico, but he has the ability to talk to certain humans in English. He also has a knack for solving crime. And it's a good thing he lives on the Lake Erie Shoreliner with Clarence the train's conductor, because someone or someones are up to some serious mischief. The daughter of the rich Strasbourg family, Ellie, was enjoying a nice ride on the train headed to the Conneaut Lake unveiling of their Blue Streak roller coaster and had just introduced herself to another youngster, Henry Shipley, when she suddenly disappeared and a ransom note appeared. The kidnappers were demanding that Ellie's parents turn over the famous Blue Streak necklace in return for the girl. Clarence, Henry and Sam are swiftly on the case trying to figure out who the kidnappers are and where they took Ellie. In between updates on the case, Sam gives readers flashbacks into his rather eventful and exciting life before he joined Clarence on the Lake Erie Shoreliner. 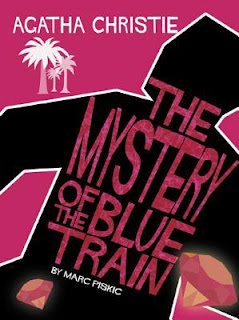 The Mystery on the Blue Train (Agatha Christie Graphic Novels) adapted & ill. by Marc Piskic, based on the story by Agatha Christie

The death of a woman on a train who was in possession of a famous ruby necklace is a mystery only Hercule Poirot can solve.

Not personally my favorite graphic novel adaptation, but this is a very approachable way for reluctant readers to be introduced to Agatha Christie. 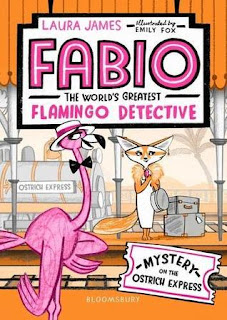 Fabio and his friend are taking a vacation and are traveling on the Ostrich Express. When a thief strikes the train, Fabio is on the case to find out who stole just that one gem and why.

I really enjoyed the African animal cast of characters. Hand this to little sleuths along with a pair of sunglasses as several pages of this are glaringly bright fluorescent pink and orange! 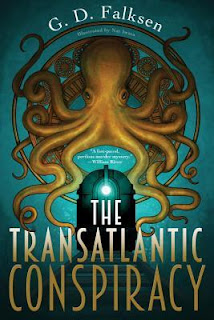 The Transatlantic Conspiracy by G.D. Falksen, ill. by Nat Itawa

Rosalind is the only daughter of successful American industrialist Mr. Wallace. She was enjoying the Season in England with her best friend Cecily de Vere when her father messages that he needs her to be on the inaugural trip of his newest venture, the Transatlantic Express which will go under the Atlantic from Germany to the United States. Rosalind knows the routine, but she is tired of her father using her as a business stunt. Her friend Cecily helps make the trip sting a bit less when she and her brother volunteer to come along. Upon departure Cecily runs into an old friend from finishing school, and Charles goes missing. But that isn't the last of the mysterious things to happen on the trip. Halfway to America two people are brutally murdered. But who would do such a thing and why?

This reads more like a high society drama with young ladies talking about the Season, what is in fashion, scandalous hobbies (like motoring), and the men on the train for much of the book until the murder happens. Then things get much more mysterious and the tone takes a turn.