Anyone who has had a pet with fur or looked after a small child for any length of time knows that bath time can be a downright battle. Today, we have three books that take the blood, sweat, and tears of bath time and boil them down into some hilarious reading. 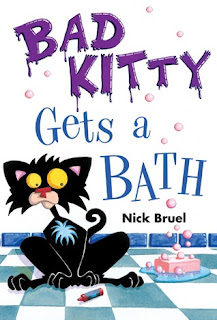 Bad Kitty Gets a Bath (Bad Kitty, #1) by Nick Bruel

It is time for Bad Kitty to get a bath. Normally Kitty keeps herself clean, but every once in a while she just needs some extra help. As Kitty's owner prepares for this event, readers get tips on how to bathe a cat and cat facts, as well as some hilarious entertainment. (This just might be the most accurate depiction of bathing a cat in literature.)

Cat Owners, Cat Lovers, Humor Fans, Graphic Novel Fans, Those Who Like a Mix of Facts & Fun, Lower Grade Readers (but really anyone) 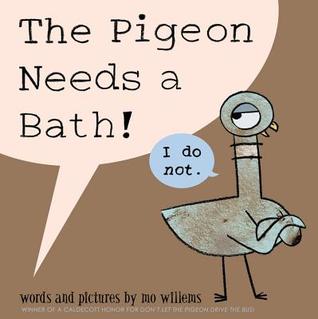 The Pigeon Needs a Bath! (Pigeon) by Mo Willems

Pigeon is getting rather dirty, but he is decidedly not taking a bath. In fact, he has dozens of good reasons not to get in the bath. But after listing all of those and delaying as long as possible, Pigeon finally gets in the bath...and discovers it's not so bad after all. 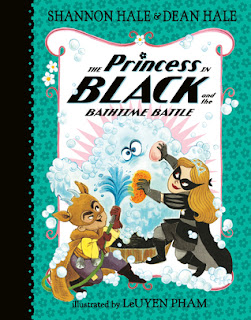 When a HORRIBLE stink invades the goat field, the Princess in Black and the Goat Avenger, along with other heroes from nearby kingdoms, arrive to help. But what could be causing such an awful stench? One thing's for sure; it will take all of the heroes using teamwork to save the day.

Brainstorm 230: Imaginative Adventures on the Moon

We’re going to take a little trip to the moon today. But this is the fictional/mythical moon, not the realistic/historical moon we see in our night sky. Today’s books all feature imaginative, fantastical adventures on an imagined version of the Earth’s moon. These run the gamut of moon imaginings from The Moon-King's very imaginative and unique version of what the moon is like to Space Case's meticulously researched look at what an actual moon base might be like in the near future. Happy lunar travels! Click on the links to see my full reviews including content notes. 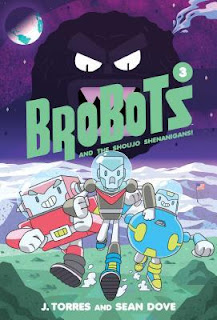 Brobots and the Shoujo Shennanigans (Brobots, #3) by J. Torres, ill. by Sean Dove

The BroBots are excited about going to Starlight's concert on the moon, but when they get there they discover that someone has knocked out Starlight with poison. Who would do such a thing and why? Can the BroBots save the star and the concert with some help from their friends?

This is a Snow White retelling with robots, a celestial monster, and a superhero singing star (who likes to clarify that she writes all her own lyrics and music, does her own choreography, and never lip syncs at concerts). And take heart/be warned (whichever way you want to take it): It is LOADED with puns. 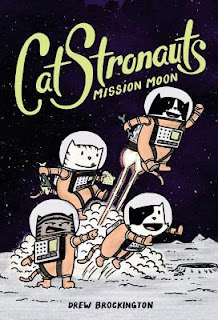 There's an energy crisis and World's Best Scientist has the solution. Send the CatStronauts to the moon, have them set up solar panels and then use a special device to send the energy down to Earth. There's a limited supply of energy left, so the CatStronauts must train quickly and there's no margin for error on the flight or the Earth will go dark. 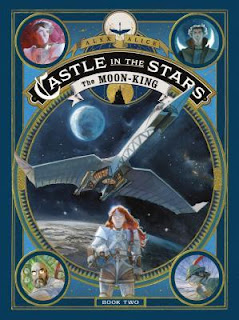 The Moon-King (Castle in the Stars, #2) by Alex Alice, translated by Anne & Owen Smith

Though someone tried to sabotage the takeoff, King Ludwig's aethership has made it into the sky. He, Professor Dulac, Dulac's son Seraphin, royal maid Sophie, and local boy Hans are on their way to the aether. Dulac just wants to get there and return to Earth, but King Ludwig has bigger ideas. When further damage to the ship is revealed, the group is forced to land on the Moon. Will they survive? And if so, what will they find there?

This is book 2 in an ongoing graphic novel series based on real history and Prussian/English/French tensions in the 1800s but with an added very non-historical steampunk element of aether ships and a space race. 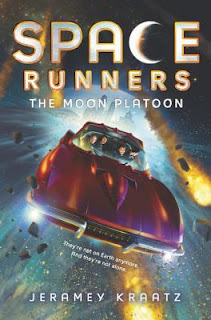 Benny is super excited he was chosen to be a scholarship winner for a two week visit to Elijah West's Lunar Taj on the Moon. He's hoping that this experience and the money he's promised after the trip will get his family a more permanent home so they can get out of the Drylands. After landing on the Moon, though, some strange things happen. Benny could leave things in Elijah's hands, but his new friends are also curious and dissatisfied with Elijah's responses. They start to do some investigating themselves and stumble upon a find that will rock their worlds and challenge them like never before.

Benny and friends adventures on the Moon and beyond continue in 3 more books. 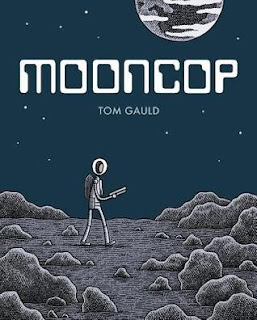 What if there were a colony on the moon complete with its own police force? When the colony thing starts to go bust and the people get replaced by robots or just decide to go home, how would a moon cop fill his time? 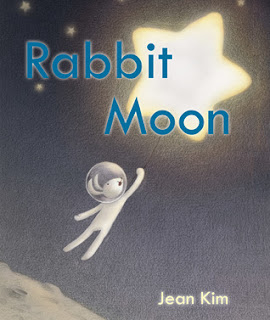 Based on Korean folklore about the Rabbit on the Moon who collects wishes, this story explores what the Rabbit would wish for.

Make sure you read the author's note in the front of this beautifully illustrated book before reading the story to fully get what is going on. 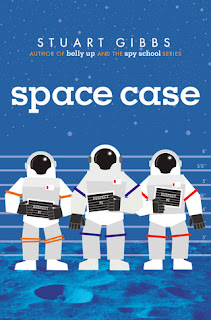 Dashiell Gibson is one of a handful of kids on Moon Base Alpha. Actually, he's one of a handful of people on Moon Base Alpha. There's a few families with both parents filling vital moon base rolls, as well as a couple other single specialists, and one snotty tourist family. Dash thinks they all know each other quite well. But when Dr. Holtz goes out the hatch and dies of a suit malfunction, Dash smells foul play. The Moon Base commander tells him to put his foul play theories deep under a moon rock and leave them there. But Dash can't seem to let things be. Dr. Holtz had a lot of stuff going for him, and just hours before he died, Dash overheard him in the bathroom talking about an exciting new discovery he was about to announce. Why would a scientist on the edge of a breakthrough do something stupid like go on a moonwalk alone? As Dash keeps poking his nose around base (because, let's face it, there's not much else for a kid to do on a small moon base) he discovers more and more residents of the base with possible motives for getting rid of the famous doctor. The question is, which motive was worth killing over, and who is next?

This is the first of 3 cases Dash solves while living on Moon Base Alpha. 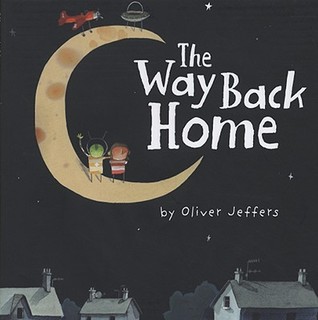 The Way Back Home by Oliver Jeffers

A little boy finds an airplane in the closet, so naturally he takes it for a flight. He accidentally crashes into the moon, where he meets a Martian in a similar predicament. Together, they help each other get home.